I am in the middle of research for this game. You may already know (spoilers) that Star Raiders was packaged with an Atari Force comic, #3 to be exact. I thought I had a copy of this loose, but I actually don't. I opened up the outer Star Raiders box (spoilers again) to get the one out of the game box. Lo and behold, the game box was still sealed shut. 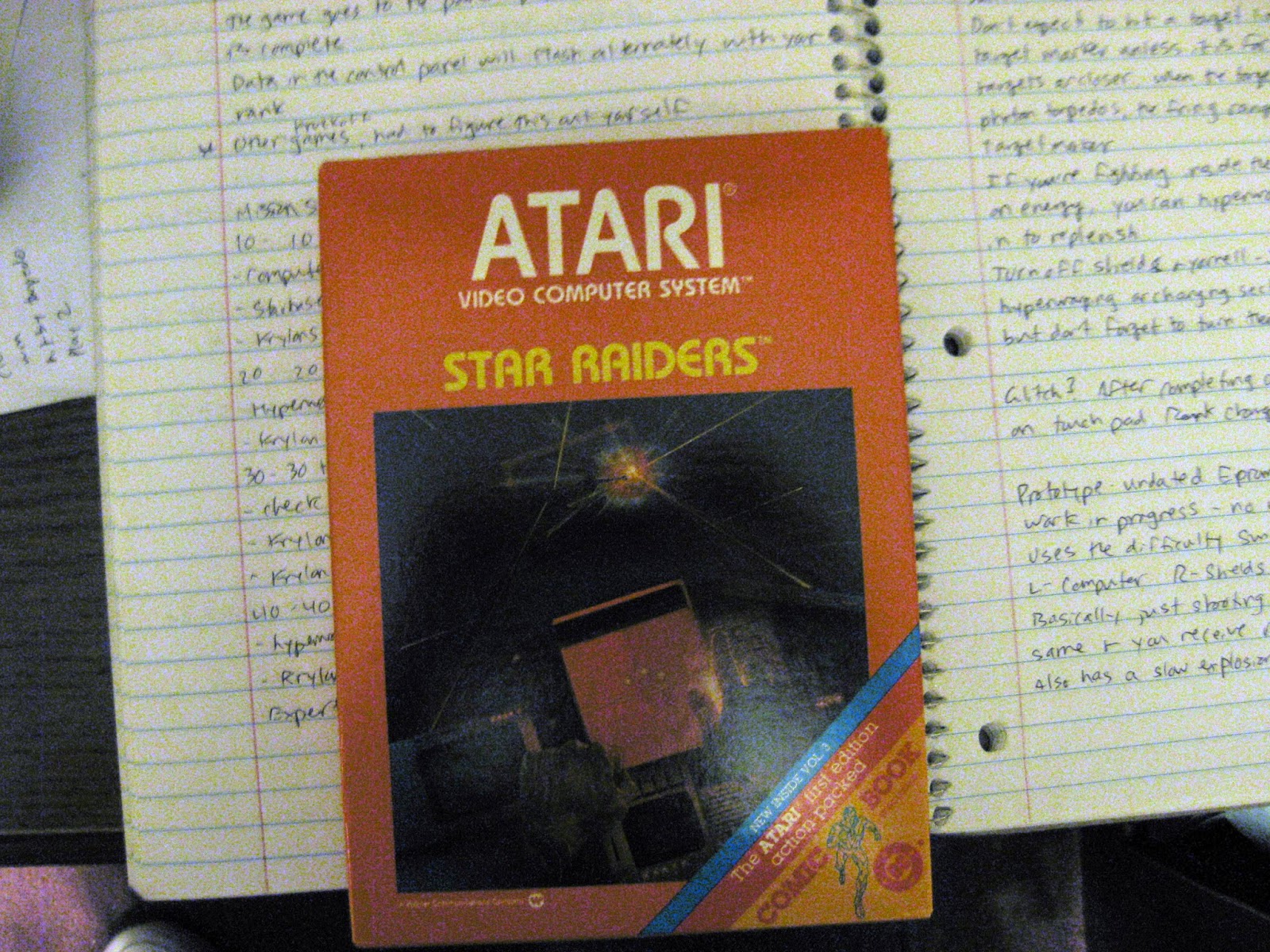 I remember vividly trying to open these glued hang-tab boxes when I was a kid, and failing miserably. Judging by the boxed games I now own, lots of other folks failed as well. So I was actually smart about this, and I asked Sarah if we still had a hair dryer (neither of us use one). She said we did and she asked me what I needed it for. When I told her she suggested a heat gun that she uses for crafting with rubber stamps. She also reassured me that it wouldn't burn the box. 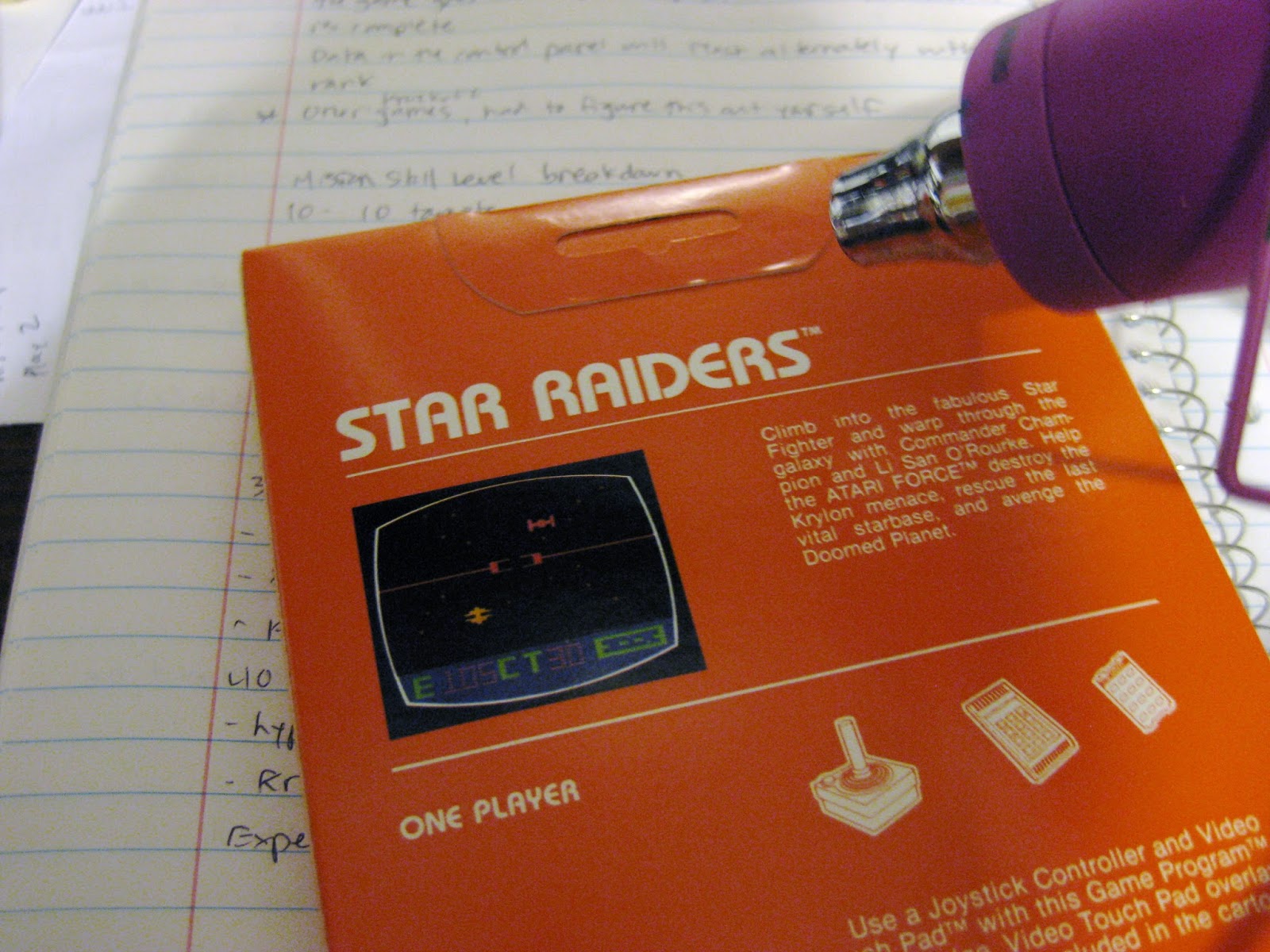 Since the glue that Atari used on these boxes is now akin to cement, I thought this would take a long time. I worked on the hang tab first, and after about two minutes it came up with no trouble. 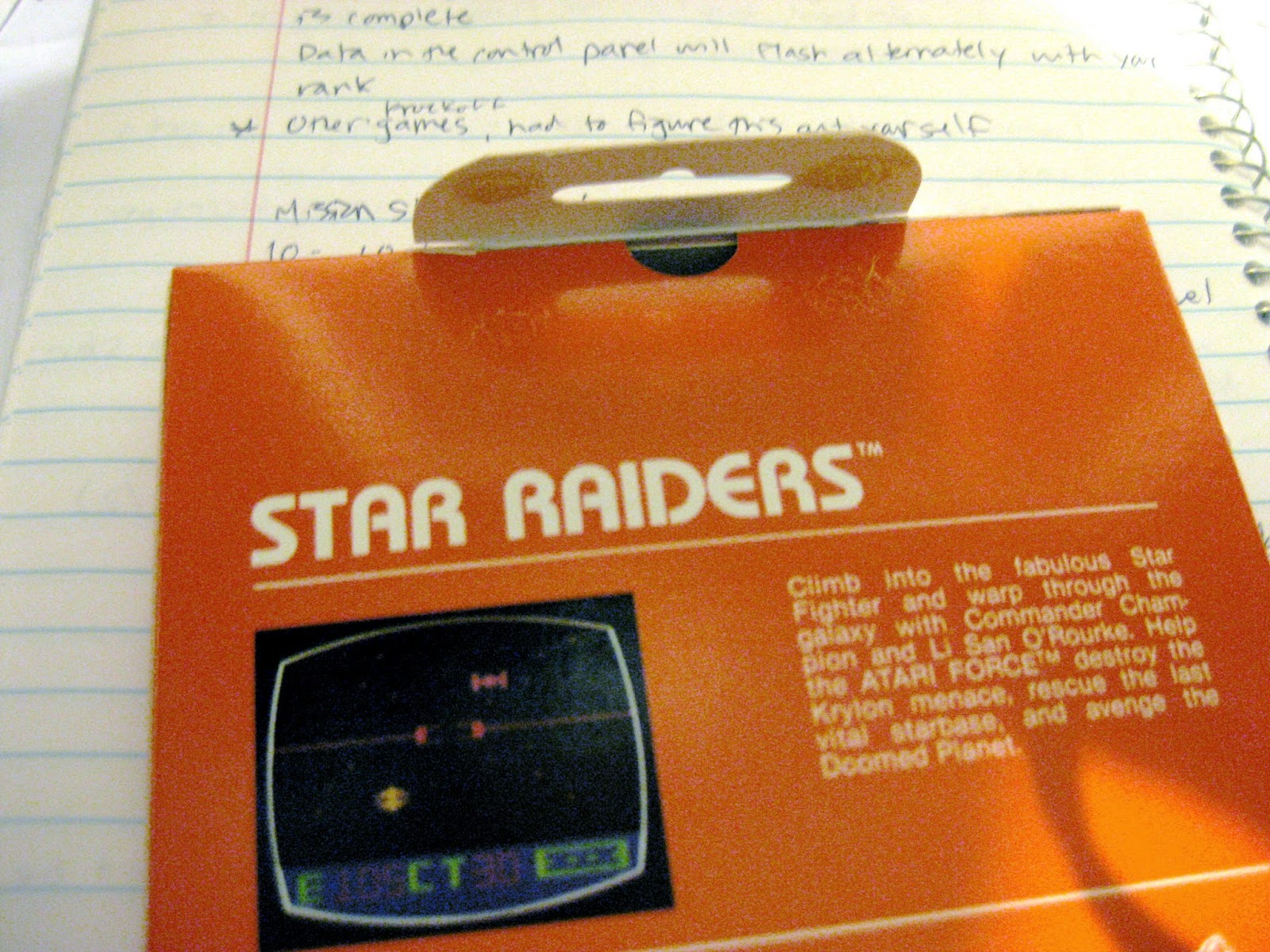 Again, I was not stupid enough to put my finger in the molten glue (that's two in a row for me, pretty good), but it hardened back up pretty quick, and the strings that lingered after I opened it just broke off. This was actually going to work! I tackled the top flap next, and that took even less time, despite there being more glue (but still only in 2 spots like the hang tab). It probably got the residual heat from the tab too, helping it along. 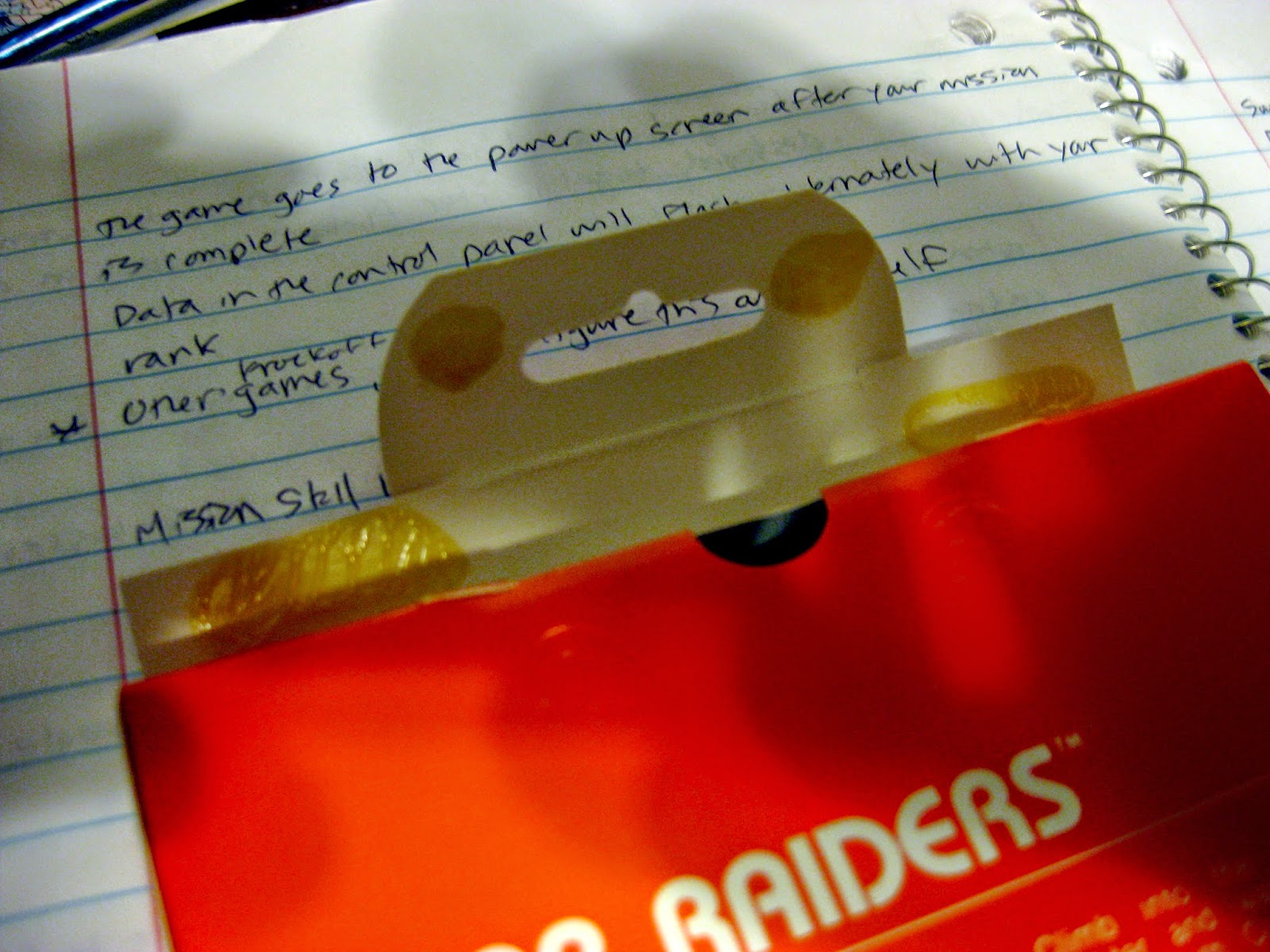 After waiting for the glue to dry completely (three in a row! Something bad is going to happen), I took out my treasures that were packed up in late 1982. I pulled out the cart first, and the Touch Pad overlay was sticking out of the cartridge cover. I have no idea how it worked itself in there. As you can maybe see in the picture, the cart has a mild case of Actiplaque, even being cooped up in that box all this time. Maybe even because of it, I don't know. You also may recall me talking about the numbers stamped into the end labels of many of the picture label cartridges. It is widely accepted that these numbers denote the week and the year of manufacture. If that is correct, then this cart was manufactured right after Halloween in 1982. I remember buying this game for myself (not this copy, of course), but I don't remember when I bought it. I was working at this time but it may also have been from Christmas/birthday money. I wish I could remember.

There's also the manual (a revision 1, as far as I know there wasn't a revision 2 to fix the Krylon typo), a revision E 1982 catalog (Pac-Man is front and center inside the front cover), and the elusive Atari Force #3. That will be my lunch date tonight at work. And that's why I went to all this trouble, because I don't have a smart phone to look at the comic online. Half of this podcast is analog, as you can see from the notebook in the background. :) 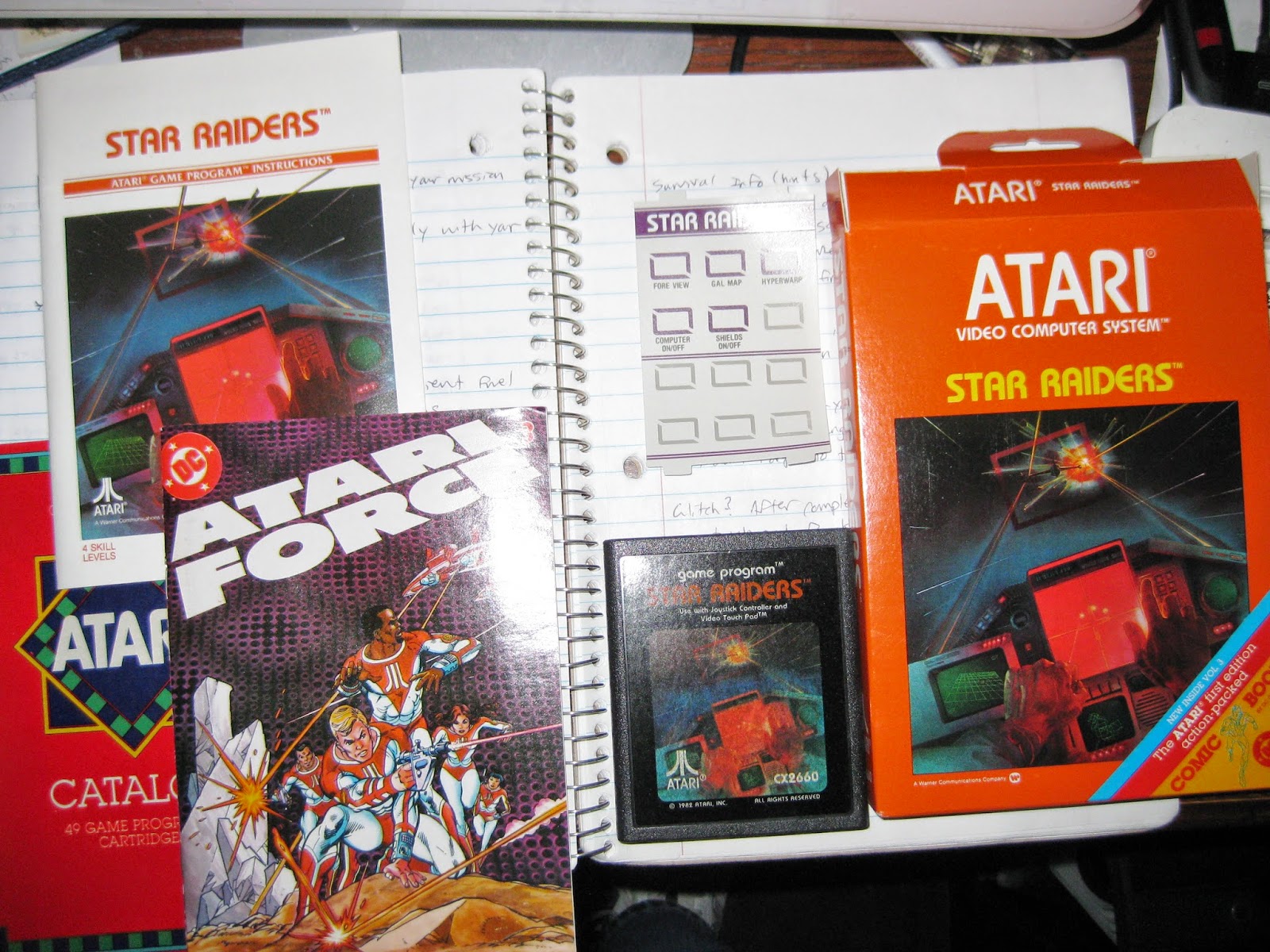 So why did I not make a video of my unboxing? Well, I am not Phil or Willie, both of whom do a wonderful job (check out the links!). I have no idea how to edit video. I know I have a Youtube page, but I doubt I will use it unless I do Extra Life again this year. I have to start remembering to like videos though, especially the ones that Phil and Willie do for my show. Sorry guys.

Finally, even though I don't play video games as much as I collect them, I don't believe in having sealed games. Games are for playing, and I especially love opening these older games. I have a few more unopened 2600 games that I'll be getting to eventually...
Posted by Atari 2600 Game By Game Podcast at 8:40 PM