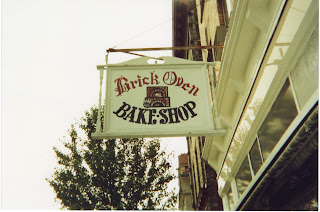 Merry Christmas everyone! I recorded this episode while I was baking Christmas cookies, so please excuse the sound quality and background noises. I thought that would be a good time to talk about what I do for a living (and for leisure too!). I hope that you will enjoy listening to it. Thank you once again for a wonderful year!

Rainbow Cookie recipe (TRY IT)
Books by Peter Reinhart (I have Crust and Crumb and Bread Baker's Apprentice)
Standard Baking Company in Portland ME
Bing's Bakery in Newark DE (my favorite in the state)
Posted by Atari 2600 Game By Game Podcast at 1:26 PM No comments:

Welcome to the 5th annual Christmas show. Thanks to all of you for contributing over the years to make these special shows so much fun for everyone to listen to. Merry Christmas and Happy Holidays to all. Thank you so much for listening!

Need something for the Atari weirdo in your life? Look no further! Here are some gift ideas that will make you scream "STELLAAAAAAA!!!" That makes no sense. As always, thank you for listening.

John Lennon has been a huge part of my life for decades. In this Bonus Track episode, I talk about how his murder affected me then and now. I know it's not the most happiest of topics around the holidays, I probably should have put this out on his birthday. But it didn't make sense to me to do that.

One thing I forgot to talk about during the show was one of my trips to NYC in the late 80s. I went with some friends to the Dakota building, where John Lennon lived and was murdered. I left feeling a renewed sadness about the murder, because the area where he was shot was so small. I had built it up in my head that since this was such an earth shattering event for me, the area where it happened would be bigger somehow. But it wasn't, it was just the entrance to an apartment building, albeit an expensive one. We went to Strawberry Fields in Central Park across the street afterwards, which made me feel a little better, but not much. I wasn't expecting so many flowers and trinkets left by fans on the Imagine mosaic almost a decade after the murder. I think a part of me was hoping to find some answers there as to why this happened, but I was disappointed. I don't think now that there are any answers. I would like to go back to Strawberry Fields someday, but I will stay away from the Dakota.

Regardless of the morose subject matter, I do hope you enjoy the episode and I thank you for listening. We all shine on. 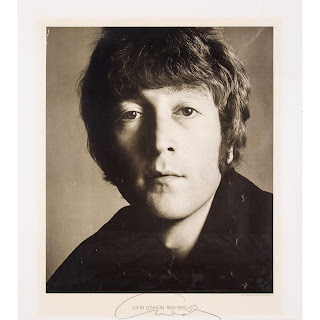 My favorite photo of John Lennon, by Richard Avedon. Unsurprisingly, it appears on the cover of the first Beatles album I was aware of, Love Songs. A copy of this poster hangs in my living room.
Posted by Atari 2600 Game By Game Podcast at 6:00 AM No comments: